Fatigue? Adrenal Fatigue? And What to Do! 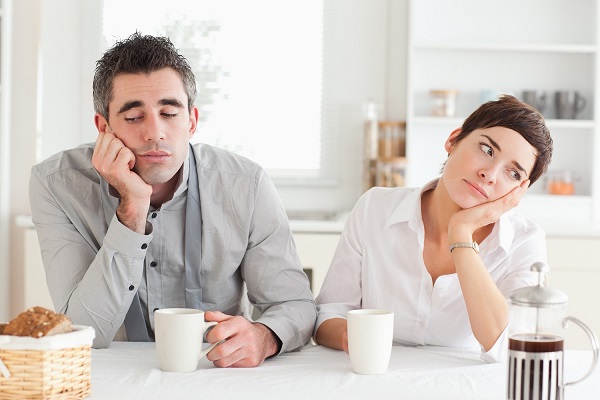 Is it normal to get tired as we grow older?

As we age, hormone production and nutrient status decline. Hormone function is about 50% by the age of 50. Absorption of B-12 declines naturally with age. Although this is still considered “normal,” it is not “optimal”. The decline of hormones and nutrients results in a host of symptoms (including fatigue, insomnia and weight gain) and ultimately leads to degenerative diseases such as arthritis, heart attacks, high blood pressure, diabetes, osteoporosis and cancer. Correction of hormones and nutrients to “optimal” levels, detoxification and mind-body interventions are effective in correcting energy levels back to normal.

Why are we seeing more fatigue and adrenal compromise?

With increasing frequency we are faced with the progression of fatigue to adrenal insufficiency and often adrenal failure. These are the people, of any age, who come in with fatigue, achiness, insomnia, inflammation, hypersensitivity to everything, panic attacks and many more symptoms. These are the ones who end up with diagnoses such as fibromyalgia, anxiety disorder and early arthritis. As such, this has been appropriately called “The 21st Century Stress Syndrome” by Dr. James Wilson.  At this point in history, we will rarely encounter the patient who has strong adrenal function because:

What is “adrenal fatigue” or “adrenal burnout”?

With the current levels of stress in daily life, we are seeing more and more dysfunction of the adrenal gland. The body is programmed to respond to acute stressors with an acute stress response, which includes elevation of cortisol, epinephrine, heart rate, blood pressure and general sympathetic nervous system response. When people are exposed to long periods of emotional or physical stress, the adrenal gland does not have the nutrients to produce a normal cortisol response. The adrenal gland then enters an insufficiency status (some call adrenal burnout), characterized initially by severe fatigue.  As it progresses and cortisol levels decline, symptoms may include body pain, multiple sensitivities, allergies and difficulty dealing with normal life stressors. Other signs and symptoms of adrenal insufficiency may include:

As the adrenal gland is ultimately the gland that mounts our survival response (“fight or flight”),  the body attempts to make up for deficient cortisol by converting hormones such as DHEA, progesterone and testosterone, causing further symptoms associated with these hormones including infertility. With adrenal insufficiency comes decreased conversion of T4 to T3, increased reverse T3 (which blocks T3 receptors) and a dysfunctional thyroid. These conditions are treatable by high dose nutrition, hormone replacement, detoxification and mind-body interventions.

What are causes of fatigue and adrenal insufficiency? 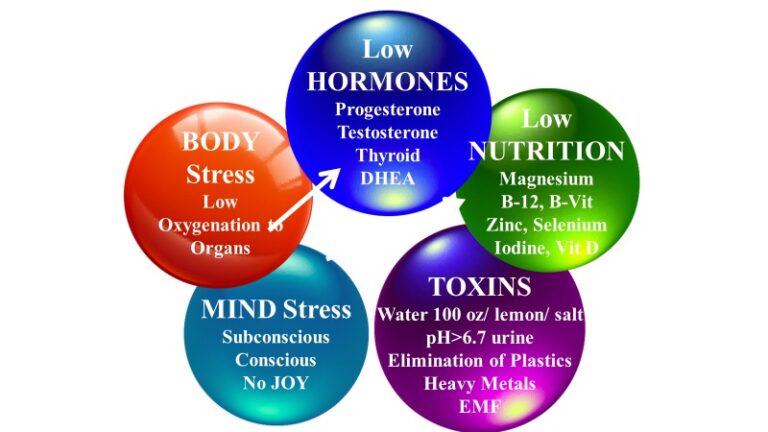 5. Body Balance: low tissue oxygen and   pain are major  contributors to fatigue. When you are in pain, your body is using  cortisol and nutrients more rapidly in order to detect pain and respond.

What are cures for fatigue and adrenal insufficiency?

The two most important factors to address include 1) reduction of stressors and 2) 8 hours of solid sleep, which induces adrenal recovery. Fatigue can be resolved in over 85% of cases. Resolution time can vary from 12 weeks to over 6 months depending on how severe the fatigue and how aggressively you treat. The more severe the fatigue, the more interventions needed. To address fatigue, you must address imbalances in each of the 5 areas of the 5-point model (Figure 1):

Interventions which may be used include:

5.Body Balance. It’s all about getting oxygen to all parts of the body:

Figure 3. Legs up the wall 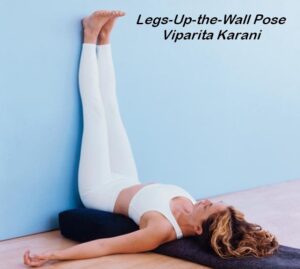 6. Adrenal glandulars and herbal formulas containing cordyseps, Siberian ginseng, Korean Ginseng, rhodiola, licorice root, and ashwaganda, are very helpful when used in conjunction with the other therapies. These should be continued for 6 months, while the adrenal is recovering. Of the ones available AdrenalForte is the most effective herbal formula.

What is the connection between adrenal function and thyroid?

When treating these patients, it becomes evident that when adrenal insufficiency is present, thyroid function is compromised. This may be due to:

In the event of low thyroid function, it is imperative that one addresses thyroid restoration only when the adrenal supportive therapies (especially MagnesiumRx) are on board and the patient is not suffering from anxiety or heart palpitations. This is due to the fact that metabolic processes stimulated by thyroid hormone also increase adrenal demands. Specific interventions which can facilitate starting thyroid restoration include:

All disease eventually presents with low energy; therefore, this symptom should be addressed aggressively by removing underlying causes. To optimize your wellness, Request an appointment: https://www.sajune.com/book-now/ today!